Dr. Jeannie Harrison is a Rockford native. She earned her B.S. in Biology at Rockford College and followed with her veterinary studies at University of Illinois College of Veterinary Medicine. Her professional interests include primary/preventive care, dentistry, and internal medicine. Outside of work she enjoys gardening, running, CrossFit, and spending time with her terriers.

Alicia Guarino, DVM
Practice Owner
Dr. Alicia Guarino returned to the Rockford area in 2009 after a 10 year absence. She earned her doctorate in veterinary medicine from the University of Missouri -College of Veterinary Medicine in 2004 and was practicing in Wisconsin from 2004-2009. Her professional interests include small animal medicine and surgery as well as exotic and wildlife medicine
Outside of work, Dr. Alicia loves spending time with her family enjoying the outdoors, especially in northern Wisconsin, and traveling. Her sons share her avid interest in wildlife and nature which makes for the most interesting discoveries! 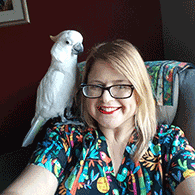 Dr. Katie Racek-Peters has been practicing in the the Greater Rockford area since 1996. She is a member of the AVMA, ISVMA, GRVMA, VECC and  Association of Avian Veterinarians. She has a strong interest in exotic pets (parrots, reptiles, ferrets, rabbits, guinea pigs, rats, hedehogs, sugar gliders)  but she loves seeing dog and cats also. "It is all about quality of life for our pets and the love that we share